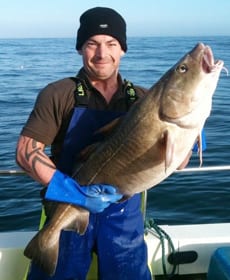 Skipper Patrick Davis has been a keen fisherman most of his life, he has been commercially fishing as crew out of Looe for numerous years until his first charter boat called “Orca” which he built and coded himself in 2008, in 2010 he went on to own a 33ft Aquastar known as “Carrie Jane” until now in 2015 he designed, built and coded his new boat which he named “Island Cruise” which is licensed to carry 14 people up to 60 miles offshore.

With his love of both Fishing and Boating he decided to put the two together and now takes passengers fishing during the summer season, and during the winter months you will still find him working as crew on a commercial fishing boat.

Skipper Patrick Davis knows these waters well and will take you to prime fishing spots, there is much to see on this part of the Cornish Coastline, Looe Island, Port Nadler, Talland Bay and the quaint Fishing village of Polperro.